I Am An American Philosopher: Tess Varner 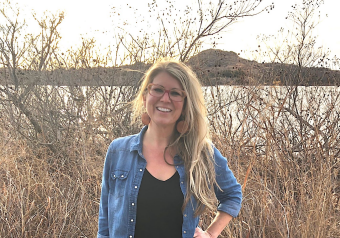 Tess Varner is Assistant Professor of Philosophy and Director of Women’s and Gender Studies at Concordia College. She is the author of several articles on feminist-pragmatism, environmental philosophy, pedagogy, and public philosophy, as well as chapters in Restoration and Philosophy: New Philosophical Engagements with the Stone Campbell Tradition (2019), and The Oxford Handbook of Jane Addams (forthcoming). She is a past recipient of the Jane Addams Prize (2020) and is currently a member of the SAAP Board of Officers.

The way I like to think about and teach American philosophy is primarily as a “working” philosophy—a philosophy that invites us to get our hands dirty and to join in the mix, rather than passively observe or critique from outside. I’m most drawn to themes of embodiment, action, and meliorism and to thinkers whose philosophical underpinnings led them to become involved and invested in the social problems they encountered in their own neighborhoods.

The boundaries of the American philosophical tradition are contested, of course. We see a tradition that has often celebrated the idea of democratic life together and the validity of others’ perspectives while still gatekeeping who fits within the tradition. For that reason, I return again and again to pluralism as a hallmark of American philosophies always working to become what they attest to be. A student of mine who just encountered American philosophy for the first time last semester recently said that she liked it because it was a “stretchy” philosophy, and I think I’ll be keeping that characterization close.

Reflecting on what American philosophy has meant to me is more personal. I was interested in a lot of different philosophical approaches before I found American philosophy, but it felt like my “philosophical home” the moment I found it. It is the philosophy in which I first recognized myself in the works I was encountering and the tradition in which I found my own voice. It helped me put language to things I was committed to without yet knowing how to articulate them—like fallibility and the primacy of experience and ideas about growth, progress, and hope. American philosophy has offered important correctives to my thinking in some ways and important coherence to them in others. It has also been the source of deep and formative relationships; colleagues at SAAP have been mentors, friends, and now co-authors, and I’m indebted to this community for its hospitable spirit and for giving me space to grow into this rich tradition.

My path to American philosophy has been a pleasantly meandering one. My parents were both literature professors and I grew up with Thoreau and Emerson and Whitman as household names. I studied religion in my undergraduate education and served as a minister in a progressive, ecumenical tradition for several years before pursuing degrees in philosophy. Once I did, it was with interests primarily in feminist philosophy and environmental philosophy. Even though I saw meaningful connections between those areas, it wasn’t until much later when I found feminist-pragmatism that things really came together for me.

During my PhD program, I was encouraged by one of my mentors and professors, Piers Stephens, to attend the Summer Institute in American Philosophy, and I think at the time only William James and Cornel West were even familiar to me! People at that first summer institute I attended pointed me toward John Dewey and Jane Addams and things began to fall into place for me from there. I’m not sure I would have stayed with philosophy professionally had I not been shepherded through like that!

My ongoing project right now involves a philosophical exploration of the concept of wildness. I’ve recently been writing about wildness in the context of pedagogy, drawing on Dewey and John William Miller. Now, along with Erin McKenna, I’m investigating the language of wildness in the context of conservation politics and policies related to animals typically categorized as “wild.”

I’m also interested in American nature writing and uncovering pragmatist influences and affinities in thinkers like Edward Abbey, Terry Tempest Williams, and Annie Dillard, as well as thinking of how this particular kind of writing can be seen as a form of public philosophy. As I read within that genre from a feminist-pragmatist perspective, I am interested in how the wild character of their work might be useful for philosophy—a discipline which has rarely engaged with them. As one element of this project, I co-lead a summer course with another professor for 15-20 students where we tent camp for a month on a 5000-mile road trip visiting 9 national parks, focusing on nature writing as public philosophy and on the art of the American West.

In some sense, I feel like I’m always doing it, and that’s why this tradition feels like a “philosophical home” to me. It isn’t something that I feel like I have to put aside when I’m not working.

Outside of work, however, I mostly want to be outdoors—camping, hiking, on road trips, around a campfire, or just reading in a hammock. I try to spend as much time on public lands as possible. I love to introduce other people to public lands, too, and I have taken great joy in trying to make little naturalists and junior rangers out of my niece and nephew. In non-pandemic times, I love hosting gatherings, cooking and sharing wine and my home with friends and guests. I also read a lot and listen to a lot of folk, Americana, and Western swing music—live, whenever possible.

My favorite work in American philosophy tends to be whatever I’m teaching at the moment. Everything I read with my students comes alive and feels significant as we work through it together. So, this week, it is Jane Addams’s Democracy and Social Ethics that I’m energized by, and in a month, whether it is working through McBride’s work on insurrectionist ethics or an activist chapbook by Grace Lee Boggs, I’ll be totally consumed with it.

To the question “what should we all be reading,” my first inclination is to say each other’s work. I’ve been a part of a writing group with other feminist-pragmatists meeting monthly for the last two years. Reading each other’s works-in-progress each month has been as exciting to me as my canonical favorites since I can see how the pieces develop and change and respond as they unfold over time. It has been a powerful experience.

I also think everyone should read more poetry. It’s almost a running joke with my students that whatever I’ve assigned for reading, I’ll also have a poem that I’ve brought for them to think about alongside it. I’m a bit of a pusher, in that respect. I love this line by the late Etel Adnan: “I love contemporary poetry because it moves between what we call poetry and what we call philosophy. It joins these fields and makes writing more natural, as in how it is lived in the person. We don’t separate thinking from feeling in real life, so why should we separate it in writing?”