I Am An American Philosopher: Eric Mullis 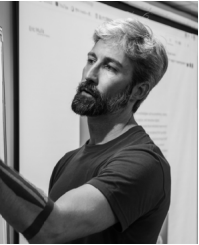 Eric Mullis is Associate Professor of Philosophy at Queens University of Charlotte. He is the author of Pragmatist Philosophy and Dance (2019) as well as several articles on pragmatism, Chinese philosophy, and philosophy of art. Trained as a dancer and choreographer, he is also a 2021 Fulbright Scholar at Taipei National University of the Arts.

For me, American philosophy is restless, aware that habits of various kinds can render life static, even as social realities change. It is also aware that stasis can occur in academia as scholarly disciplines and sub-disciplines become socio-intellectual silos. For these and other reasons, doing American philosophy means actively seeking out and reflecting on new forms of experience.

I took a course on American philosophy as an undergraduate and, in graduate school, studied with Tom Burke, but I think that it had more to do with experiences that occurred outside the university. I grew up practicing Chinese martial arts (Kungfu and Tai Chi), learned Mandarin Chinese, and went on to live and train in Taiwan and Mainland China. After learning about the pragmatist stance on theory and practice, it became clear that I had been studying Daoist ontology, Buddhist philosophy of personal identity, and Confucian virtue ethics for many years. In a Chinese philosophy class, I realized that I had an embodied understanding of concepts and beliefs that were outlined in the classical texts. In turn, it gradually become evident how much of western philosophy is disembodied.

Tired of punching and kicking all the time, I ventured into concert dance, and was surprised to find that there are contemporary choreographers making works on philosophical themes and/or practicing forms of choreographic and dramaturgical thinking which entail the interplay of theory and practice. After completing an MFA in dance, I set out to explore those approaches myself; researching and developing a dance theater piece called Later Rain (2019) which takes as its subject matter ecstatic practices of charismatic Christianity. I studied theology, history of religion, and art history (e.g., other dance works that focused on the subject matter), visited rural and suburban churches in Southern Appalachia over a three-year period, and experimented with auto-affection and dissociative states in the dance studio. Along the way, the distinction between scholarly and experiential research blurred, and I found myself considering how theater can engage philosophy of religion and the ethics of cultural representation. Later Rain poses the epistemological problem of how to discern the cause of ecstatic states to its audience (a problem noted by Jonathan Edwards, William James, and believers themselves) and takes aim at common stereotypes about charismatic Christians apparent in popular media.

| from Eric Mullis on Vimeo.

Right now, I am researching interactive digital technologies by studying the philosophy of technology and experimenting with infrared cameras and a motion-capture suit. This project is inspired by dance artists who use emerging technologies to, among other things, encourage audiences to reflect on ways they affect embodied experience and society more generally.

| from Eric Mullis on Vimeo.

I dance every day because I love it. It provides tools which allow me to continually challenge habits. I continue to travel in East Asia and elsewhere, now along with my wife, Joy Davis, who is a dancer, choreographer, and dance teacher.

I find Don Ihde’s post-phenomenology of technology especially interesting. It is anti foundationalist, practically oriented, and informed by autobiographical experience. Given the preceding, I would also advocate for seeing out work by performance-based artists who are thinking philosophically about the body in technology, artists such as William Forsythe, Bill T. Jones, Huang Yi (Huang Yi Studio +), Mark Coniglio, and Jeff Hsieh (Anarchy Dance Theater).