I Am An American Philosopher: Daniel Campos 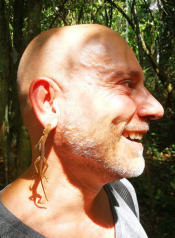 Daniel Campos is Professor of Philosophy at Brooklyn College—CUNY. He is the author of Loving Immigrants in America: An Experiential Philosophy of Personal Interaction (2017), numerous articles on Peirce, the philosophy of sport, the philosophy of science and mathematics, as well as a weekly column in ViceVersa Magazine. He is a past winner of the Peirce Essay Prize awarded by the Charles S. Peirce Society.

To me philosophy is a practice, even a way of life. It is the sensible, reasonable attempt to live well, that is, to contribute to the growth of loving reasonableness in our economic, social, political, and natural environments and communities. It requires attentiveness and responsiveness to the possibilities that life affords for realizing what is true, good, and admirable, or rather, to what we discover, through experiential reflectiveness and communal inquiry, to be true, good and admirable.

American philosophy is any effort to live that way in historical, political, and natural communities in the Americas, including all the sapiential ways of life of indigenous communities and of the various peoples that European colonization, slavery, and immigration have brought to the Americas.

In my late twenties I was dissatisfied with my professional life as a statistician in the corporate, homogenous bubble within our diverse and unjust society in the United States, and I was searching for a more thoughtful, socially meaningful, and even creative path. I took some courses in philosophy and enjoyed every one of them. Daniel Conway and Douglas Anderson were my first teachers at Penn State, and from them I got both a glimpse of what academic philosophy was like and an Introduction to U.S. American philosophy. They were also good, generous people. So they opened for me a path to a new life—intellectually, a middle way between my training in mathematics and my interest in letters.

But I guess that behind my personal search there was a sense that science, letters, and art ought to enrich our attempts at living sensibly, reasonably, with deliberate purpose. So while academically I found in C.S. Peirce’s systematic philosophy a way to survive and thrive as a student, I also found vital nourishment in the writing of Emerson, Thoreau, Henry Bugbee, Jane Addams, José Martí, Octavio Paz, and Sor Juana Inés de la Cruz, and later, Rosario Castellanos, Miguel León-Portilla, and María Lugones. All of them speak, in various ways, to American life and experience.

C.S. Peirce’s architectonic has undergirded my research into creativity in mathematics, science, and sport. More recently, I have written about agape or cherishing-love as an ethical principle in concrete human living. This work includes the book Loving Immigrants in America and articles about how agape can mediate convicted relations between immigrants and members of receiving communities in the Americas. I draw from Peirce’s cosmology, pragmaticism, phenomenology, and critical commonsensism, but I try to write in ways that non-Peirceans can understand and engage.

More recently, I have become interested in non-argumentative paths to understanding and wisdom, be they dialogues, poetry, film, narratives, or sheer musement. Paraphrasing Peirce, I call these ways of thinking “arguments that are not argumentations” (that is, that do not proceed from definitely-stated premises to a conclusion). I am more keen to explore these philosophical paths to wisdom than to write argumentations about this or that “problem.”

Perhaps for this reason I also write chronicles and literary essays regularly for magazines like ViceVersa (New York) and Suburbano (Miami), in Spanish. These portray life experiences whose meaning is enriched by philosophical reflection.

Next year Sudaquia Editores (New York) will publish a philosophical memoir in Spanish, entitled Sino Peripatético: un despertar americano, implicitly influenced by Thoreau, Peirce, and Bugbee. It is about my attempt to live an engaged transnational life across the Americas, especially the U.S., Costa Rica, and Brazil.

I enjoy movement. I walk, hike, swim, bike, and scuba dive. I also love to listen to live music and dance. Recently, I am playing with photography. I try to capture small details in my walks in nature that call my attention: a flower, an insect, a rock, a leaf, even a bird if I can “catch” it!

Vitally, I always return to Thoreau’s Walden and to Bugbee’s The Inward Morning, in the same spirit that I return to Meister Eckhart’s sermons or Rumi’s poetry. Formally, I cherish Peirce’s various series of articles or lectures from the 1890s onward.

But I enjoy it most when we all read different works and authors and tell each other about our discoveries. I think it is better if, as a community, we read very widely, rediscovering voices and perspectives, and share our findings and their relevance with each other. In my writing, perhaps I have managed to engage
the essays and poetry of Octavio Paz in ways that may be philosophically engaging for others in our academic community.

I also pay attention to what our colleagues in the Society for Mexican-American Philosophy are writing. They (We) are enriching and diversifying the philosophical conversation in ways that are of interest to the field of American philosophy at large.